Michael Weinig AG enjoyed outstanding growth in 2015. This was the message of CEO Wolfgang Pöschl at the 100th meeting of the company's Supervisory Board that took place on December 2nd in Tauberbischofsheim. 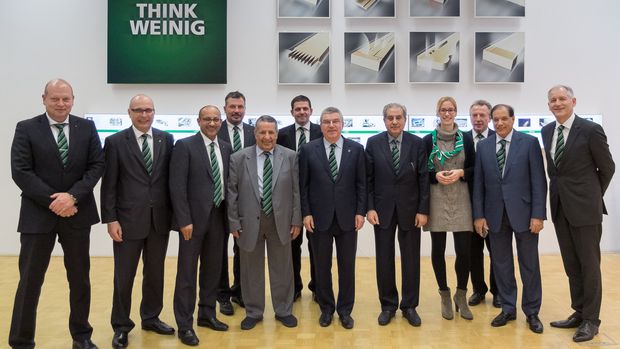 Accordingly, the Weinig Group registered a strong in-crease in incoming orders in 2015 and expects double-digit revenue growth. "We are very satisfied with our current performance. This is all the more true in view of the prevailing global economic uncertainties in many markets," said Wolfgang Pöschl.

The Supervisory Board also laid decisive foundations for the further evolution of the company in Tauberbischofsheim adopting the new sales and marketing strategy "Think Weinig". The strategy, which will lead a new market initiative, highlights the group's philosophy of offering complete solutions rather than focusing on individual components. The concept includes measures that will enable Weinig to make even better use of its comprehensive expertise. CSO Gregor Baumbusch is confident: "Customers think in processes. Weinig is the manufacturer in solid wood and panel processing that covers the entire value chain. This strength must be deployed even more efficiently in the market." In keeping with this objective, the individual Weinig product units will be consistently bringing comprehensive solutions to the market. The customer will benefit by receiving greater added value. A second package of measures will target the company's approach to regional markets. "With their different profiles, all markets have their own requirements, which will be more strongly reflected in terms of co-ordination and our approach going forward," added Baumbusch.

The Supervisory Board's agenda also included an important personnel matter. In Karl Wachter, a figure is leaving the Supervisory Board who was instrumental in shaping Weinig from the late 1990s as CFO. His appointment to the Supervisory Board in 2012 represented a first since no previous member of the Weinig Management Board had ever joined the Supervisory Board. The senior board recognized his contribution to the company by appointing him as an honorary member. Dr. Ralf Köster was appointed as a new member to the Supervisory Board. The 59-year-old Westphalian was CEO of the Bartec Group and remains a co-partner of the company based in Bad Mergentheim. He was recently honored with the renowned business award "Entrepreneur Of The Year 2015". Previously, he was CEO of the IMA Group from 1996 to 2004. The IMA Group is an international manufacturer of machines and production lines for the furniture and components industry. From 1999 to 2004, Dr. Köster was also a member of the Management Board of Lignum Technologie AG. The company was the result of a merger between Homag Maschinenbau AG and the IMA Group, which was renamed as Homag Group AG in 2004. "Dr. Ralf Köster is an extremely successful manager who, following his previous role at a leading manufacturer of wood processing machines, brings a wealth of sector expertise," underlined Chairman of the Supervisory Board Thomas Bach.

With a groundbreaking strategic decision, solid financial figures and out-standing personnel, the 100th meeting of the Weinig Supervisory Board on 2 December in Tauberbischofsheim laid down significant milestones. "It was an important meeting for the future orientation of Michael Weinig AG," underlined Wolfgang Pöschl.

Photo: The Management Board and Supervisory Board of MICHAEL WEINIG AG